The Beardmore Scupture was installed at the corner of Beardmore Street and Dumbarton Road in Dalmuir (about 6 miles west of Glasgow City centre) in the spring of 2010. The sculpture was commissioned by local residents associations from local artist Tom MacKendrick who had 'served his time' (was apprenticed) at the nearby John Brown shipyard in Clydebank. The Scupture is sited close to the location of the former Dalmuir Naval Construction Works, which was opened in 1906, as a brand new state-of-the-art shipbuilding yard for the construction of the then Capital ships of the Royal Navy - the massive battleships and battlecruisers. The Dalmuir Works was the brainchild of William Beardmore, later Sir William Beardmore and, later still, Lord Invernairn. Beardmore was the owner of a vast industrial engineering organisation which included the massive Parkhead Forge in the east end of Glasgow, one of Britain's most significant producers of armoured plate and heavy ordnance and artillary, and the Inchinnan Airship building complex near Renfrew. At its peak the Beardmore empire employed around 40,000 people on Clydeside - in addition to heavy steel castings, warships and airships the Beardmore empire also produced steam locomotives, combat aircraft, tanks and military equipment, motor cycles, lorries and cars, steam boilers annd engines.
The crowning glory of the Beardmore Sculpture is a magnificent model of the enormous Royal Sovereign-class battleship HMS Ramillies which was built by Beardmore at Dalmuir iduring the Great War.
Read More 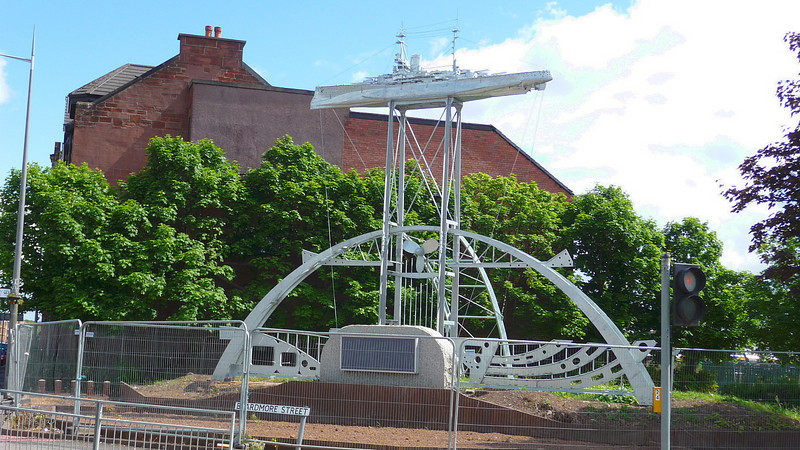